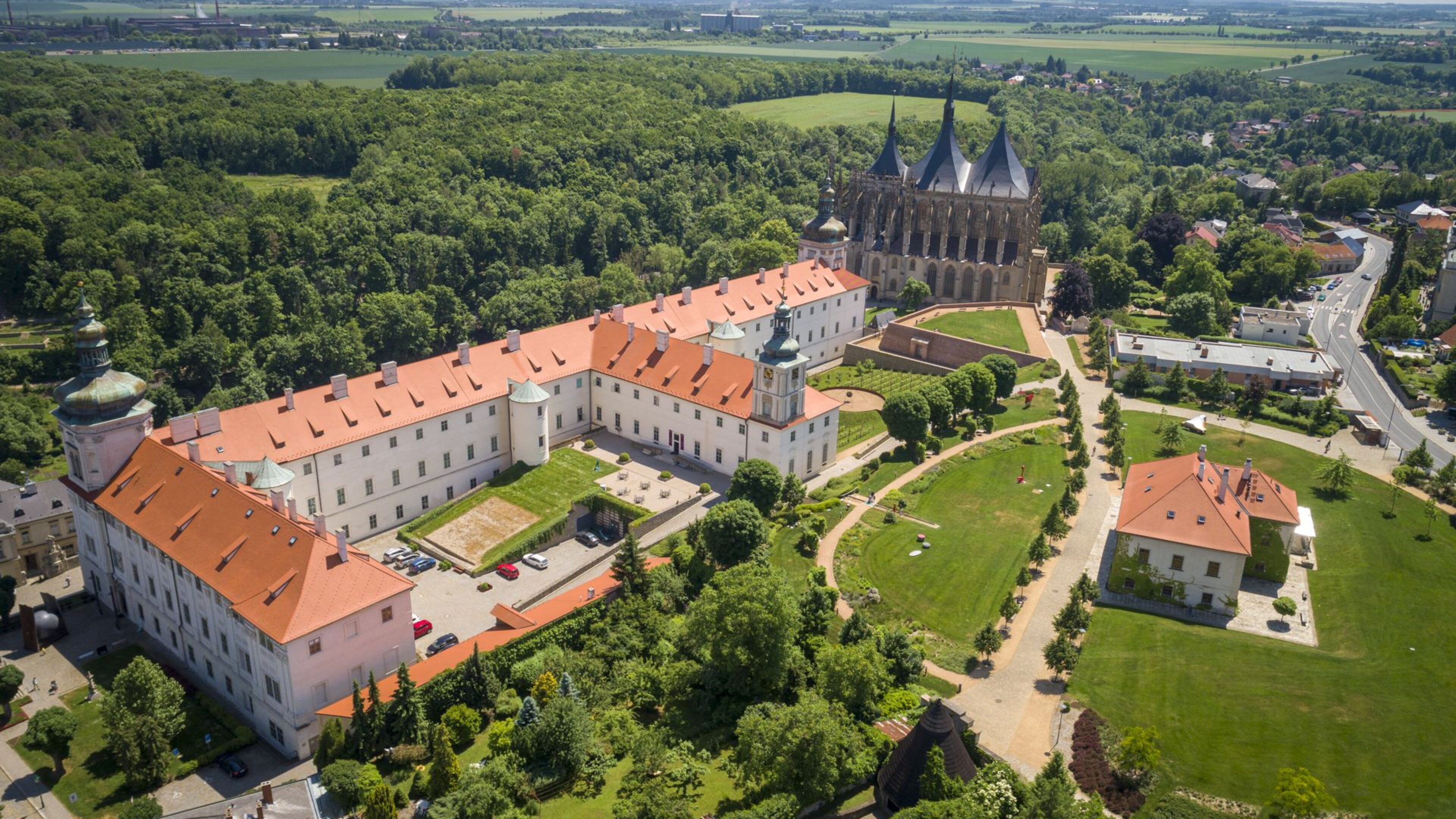 ‘Above all so that said college, grammar school, seminary and other buildings necessary or suitable for the success of the Society may be built, we hereby gift it the entire area from the eastern edge of St Barbara’s Church all the way to the Hrádek, from there along the city walls up to St George’s Church and again from this church down along the walled path to the rear gate of St Barbara’s Cemetery, which is located to the south across from the smeltery. We also permit the whole are to be walled in.’

(Emperor Ferdinand II in the founding charter of the Jesuit College, 18 April 1633)

The Jesuits arrive in Kutná Hora in 1626. Six years later, Emperor Ferdinand II issues the Jesuit College’s charter. Due to the Thirty Years’ War, construction is delayed until the autumn of 1666, when the existing buildings on the site are demolished and the terrain is prepared for the new college. On 2 March 1667, Rector Pater Jan Motitus signs an agreement with Giovanni Domenico Orsi de Orsini (1634–1679), in which the Italian architect and builder undertakes to build ‘the college of the Society of Jesus across from St Barbara’s Church at a length of sixty fathoms and two wings in the garden according to the delivered sketch signed by the rector.’ The corner stone is laid that same year, on the day prior to the Annunciation, meaning 24 March. Within five years, the third and final storey is built, and the first Jesuits move in on 1 November 1678. Following Orsi’s death, construction is overseen by the renowned architect Carlo Lurago (1615–1684), whose projects include the Clementinum in Prague. In 1709–1718, a row of sandstone sculptures of twelve saints (not counting the much later rococo statue of St John of Nepomuk) is erected on the terrace in front of the building. The statues are by the Jesuit coadjutor and outstanding sculptor František Baugut (1668–1725), who also designed Kutná Hora’s Marian column on Šultysova Street. Construction of the college is completed in 1750. Based on a document from 1724 found during renovation works in one of the building’s towers in the 1970s and containing the names of the college’s members and guests present at the time of its deposition, it is likely that some of the building was designed in part by the architect Kilian Ignaz Dientzenhofer (1689–1751).

Important figures from the Baroque era associated with the history of the Jesuit College include the Čáslav native, Jesuit philosopher and author of Old Memories of Kutná Hora Jan Kořínek (1626–1680) and the poet and missionary Fridrich Bridelius (1619–1680), a key figure of 17th-century Czech poetry who died of the plague while treating the sick at the college.

After Pope Climent XIV abolishes the Jesuit order in 1773, their former college is used by the military. Later, the northern wing and a part of the eastern wing house an army hospital, which operates here until the mid-19th century. In 1853–1868, the building houses a military training institute. During the First Republic, the local barracks are named after Jan Roháč of Dubá. During the German occupation, the former Jesuit College is used by a unit of the Protectorate military. After 1953, the building serves as an automobile and tractor warehouse. In 1998, the entire building and its grounds are acquired by the Czech Museum of Fine Arts, and the Gallery of the Central Bohemian Region officially begins operations on 8 May 2010.

In 2004–2012, the Jesuit College underwent a complicated renovation process. In the gallery below, you can see period images and also photographs from the building’s renovation.