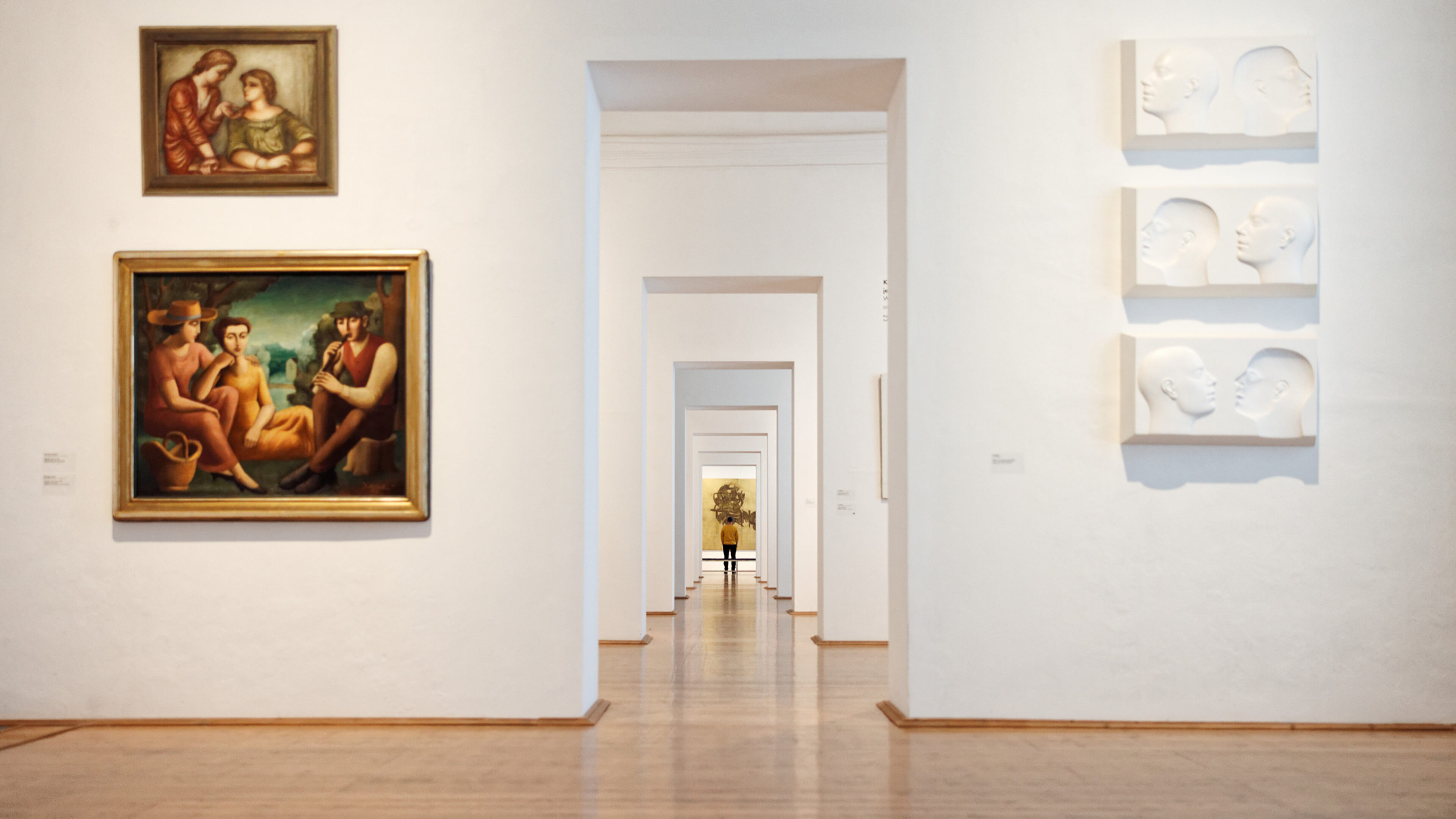 The gallery began its activities with a series of solo exhibitions by important representatives of modern Czech art, held at various locations throughout the Central Bohemian Region. Examples include an exhibition of drawings by Otto Gutfreund in Mladá Boleslav in 1963, an exhibition by Robert Piesen at the chateau in Nelahozeves in 1964 and Jaroslav Vožniak’s exhibition Paintings for Dante’s Divine Comedy, held that same year in Roztoky. One of the gallery’s most important undertakings was an exhibition by the Surrealist painter František Janoušek, held in 1965 at Nelahozeves Chateau. These exhibitions reflected the gallery’s broadly conceived approach to its later exhibition and collecting activities, which was focused on contemporary art and modern art from the first half of the 20th century. As early as in 1963, the gallery presented works from its collections at Nelahozeves Chateau. In 1965, it opened a permanent exhibition there, which presented a constantly changing selection of the fruits of its acquisition activities.

The gallery’s multifaceted endeavours included an exhibition in honour of Jiří Kars, held in Velvary in 1963, and its administration of the art works donated to the town of Lidice after the first exhibition of these works in 1967. Throughout its entire existence, the gallery collaborated with numerous cultural facilities from major cities and towns in the Central Bohemian Region, including Mladá Boleslav, Čáslav, Beroun, Rakovník, Kolín, Benešov, Slaný, Lidice, Poděbrady, Kladno, Mělník, Jemniště, Kutná Hora, Průhonice and Příbram.

From 1969 to 1971, three historical houses on Husova Street in Prague’s Old Town were renovated and used for the gallery’s headquarters and as a space for temporary exhibitions. In 1971, the onset of Normalisation led to the closure of the permanent exhibition of modern Czech art in Nelahozeves, which in 1977 was replaced by an exhibition of old European (especially Spanish) art from the Roudnice-Lobkowicz collection. In 1993, the collection and the chateau were returned to their original owners as part of the restitution process. That same year, the gallery revised its statutes and was given a new name, the Czech Museum of Fine Arts in Prague, which underscored the new direction it would be taking in the post-1989 era. In the early 1990s, the gallery’s new management began searching for a venue where it could build a permanent exhibition of 20th-century art, both outside of Prague and at different exhibitions spaces in the capital. Thanks to an agreement with Charles University, in 1991–1995 the gallery showed exhibitions of contemporary art in the cloister at the Carolinum.

In October 1994, the museum opened the newly renovated House at the Black Madonna on Celetná Street. Thanks to this undertaking, this unique monument to Cubism built by the architect Josef Gočár in 1911–1912 was fully rehabilitated. The building, located in the historic centre of Prague, was the main attraction of an originally conceived permanent exhibition that reflected the latest trends in European museum culture aimed at presenting a holistic picture of various artistic eras. The museum ended its activities at the House at the Black Madonna in 2002.

The gallery’s attempts at finding a dignified permanent venue for its collections bore fruit in 1998, when the Czech government decided to award the former Jesuit College in Kutná Hora to the Czech Museum of Fine Arts, which planned to use the college as a grandly conceived multi-use cultural facility, the Kutná Hora Centre of Art. In 2009, the gallery moved its headquarters to the renovated Jesuit College, where it began to operate under its current name, the Gallery of the Central Bohemian Region (GASK).

In May 2010, GASK opened its doors and began its exhibition activities in Kutná Hora. In 2013, renovation was completed on the final part of the Jesuit College, the northern wing, followed by the surrounding gardens. With the addition of visual playrooms, the impressive spaces of the Baroque pharmacy, the conference room and other exhibitions spaces, the gallery is now a unique cultural environment that is open to the broad public.