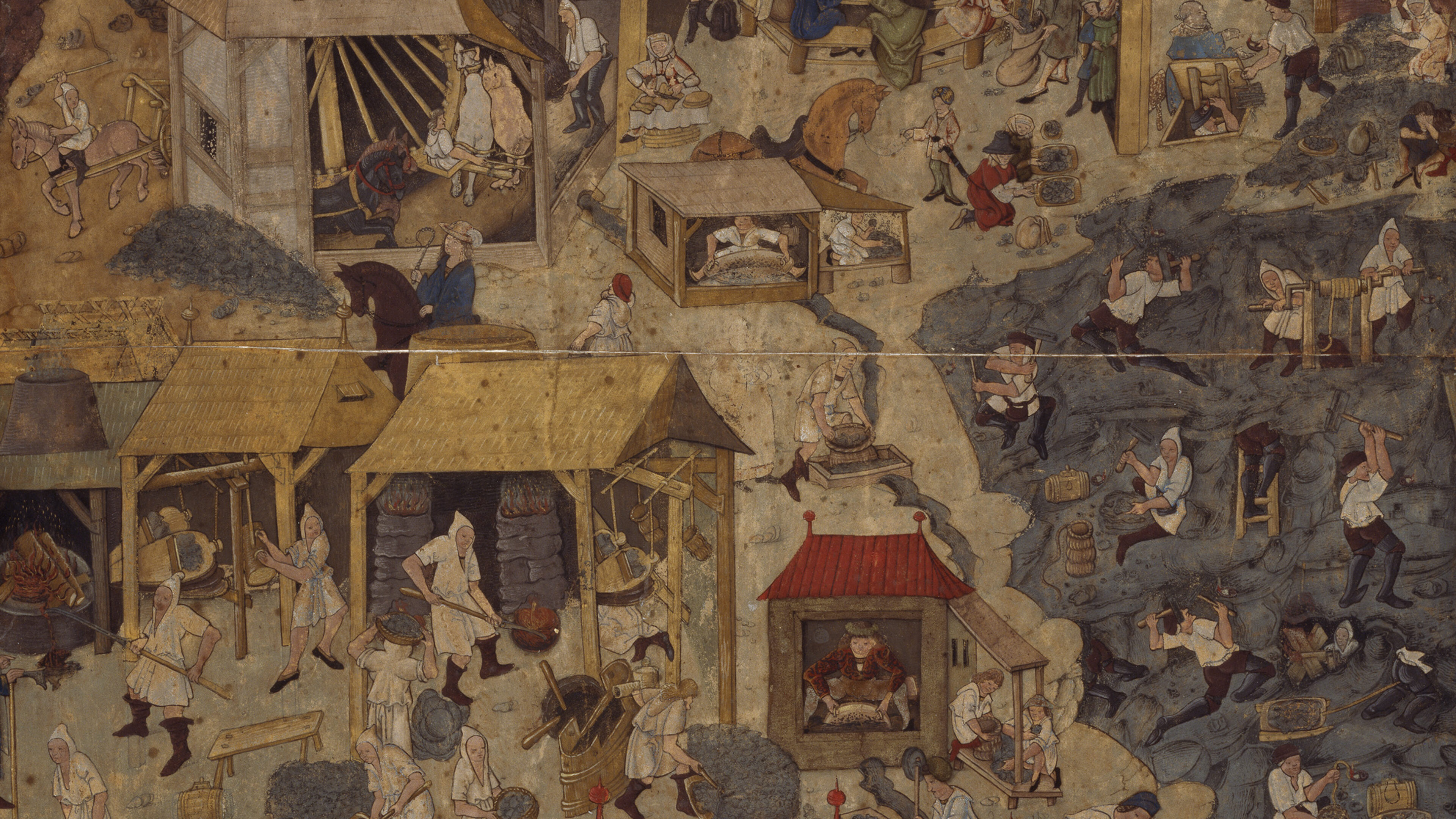 The Kutná Hora Illumination, depicting silver mining and processing in Kutná Hora, is a title page (frontispiece) that was cut out of a now unknown choirbook.

The Kutná Hora Illumination, (before 1500)
gouache and tempera painting on parchment, 643 x 442 mm

The Kutná Hora Illumination, depicting silver mining and processing in Kutná Hora, is a title page (frontispiece) that was cut out of a now unknown choirbook. Until 2009, the illumination was only known to an expert audience in the form of a black-and-white reproduction first published in 1929. Despite the fact that the illumination was never exhibited in the years that followed, art historians have always considered it one of the most significant illuminations to have been created north of the Alps. It has always attracted attention, not only because of its large size but also because of its secular theme, which was unusual in late 15th-century artistic production.

In historical literature, this work is often ascribed to the circle of the Prague workshop of Master Matouš, whose ascription and initials are known from the thematically related Smíšek Gradual. The activities of this workshop have been traced to the last fifteen years of the 15th century. The Kutná Hora Gradual, which is a gem of the Austrian National Library in Vienna, has also been attributed to Master Matouš’s workshop. The title page of this gradual, also depicting mining themes and the refining of silver ore, is considered artistically and formally to be the inspiration for this illumination. In contrast to the older ‘Vienna’ page, however, this illumination is more advanced in terms of form, artistic quality and content. Its subject matter includes later stages of the silver-ore refining process: melting and casting in the metallurgical furnaces and the work of coin minters. In contrast to the older page, the individual scenes are more skilfully integrated into a mutual composition. The human figures appear less schematic and are portrayed with a sense of vivid detail and movement. In places, the illumination even reveals the artist’s inclination towards genre-style depiction, his sense of comic humour and moral commentary expressed in details.

It is assumed that the illumination was removed from a choirbook that had been directly commissioned for one of the most important churches in Kutná Hora. The donor or patron of the choirbook must either have been someone of wealth from Kutná Hora or the master of one of the local guilds. The subsequent fate of the illumination is also surrounded by mystery and conjecture. Along with the Smíšek Gradual, it could well have been gifted in 1590 by Petr Vok of Rožmberk to Ferdinand, Duke of Tyrol. In 1920 it was identified in a private collection in Vienna. From that time until it sensationally appeared in the Sotheby’s catalogue, the Kutná Hora Illumination was thought to have been lost. In 2009, after more than five centuries, the illumination returned to Kutná Hora.