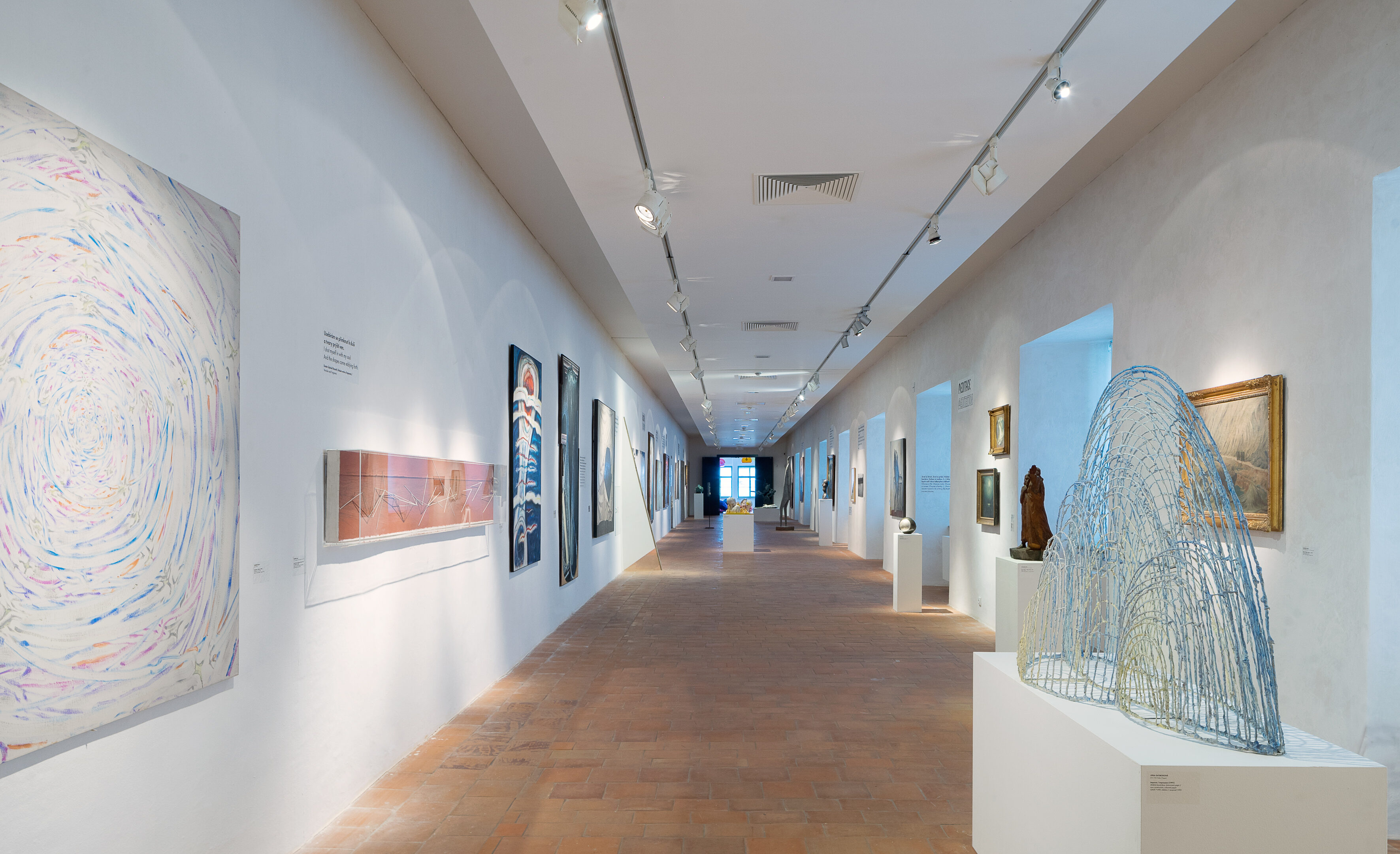 States of Mind / Beyond the Image
– Interventions and Innovations

A uniquely conceived collection exhibition that arranges works according to different states of mind into thematic categories. It will appeal to all perceptive visitors without the necessary knowledge of artistic styles and chronological order.

As the title States of Mind / Beyond the Image itself suggests, the permanent exhibition of GASK – Gallery of the Central Bohemian Region is not a classically conceived presentation of the gallery’s collection. Instead of being an ‘encyclopaedic’ sequence of artworks arranged chronologically or stylistically, the exhibition is based on the diverse spectrum of a person’s emotional and mental life. The starting point is provided by thematic pairs – either contradictory or complementary – to which the exhibited works relate (such as joy/grief, equilibrium/tension, alienation/meditation). This creates a ‘polemical space’ between two clearly defined dimensions of the inner life of humanity. The aim of the exhibition is for viewers to understand artistic expression as something that speaks about timelessly relevant aspects of human existence.

For this reason, art is not presented here as something that is historically concluded but, on the contrary, as a living testimony that is able to address us regardless of its remoteness in time or differences in cultural or national identity. This is why we have juxtaposed works from various historical periods – we want to place greatest emphasis on their fundamental human message, one transcending a specific period or style. We hope that this will enable you to better discover for yourselves what actually lies ‘beyond the image’, on the imaginary other side of the canvas…

Together with the artistic experience provided by the exhibits themselves, the ‘atmosphere’ of the individual spaces is further enhanced by short quotations or aphorisms that focus on the given theme in text form. They are poignant insights expressed by artists, philosophers, writers and musicians. With this approach, we want to create a stimulating environment in which viewers will find food for thought – not simply in the sense of definitive statements, but above all in the sense of questions that need to be answered.

From December 2017 onwards, our permanent collection is being shown in a fresh reworking. Apart from a series of newly exhibited collection works, we are presenting new long-term loans, newly chosen aphorisms accompanying individual themes and two new pairs of states of mind: independence/obsession and idealism/cynicism. Another innovation is that of specially conceived interventions in which contemporary artists reflect on particular mental states differently than through ‘classical’ artistic techniques. Their chosen means of expression include installation and digital media, which are synonymous with the creative language of today.

The permanent collection States of Mind / Beyond the Image is developed in close collaboration with the GASK Learning Centre; as part of its programme ‘Inclusive GASK’, the GASK LC has commissioned several new haptic transcriptions of selected exhibits for visually-impaired and blind visitors, as well as an audio guide to the permanent collection and the Jesuit College.

States of Mind / Beyond the Image, which in 2015 won the prestigious ‘Gloria Musaealis’ Czech museums prize, presents high-quality and stimulating artworks that are set in the monumental, spacious and elegant halls and corridors of the Jesuit College with which they communicate directly. Viewers thus have the opportunity to experience the relationship between the individual exhibits, between the image and the word, between art and the Baroque interiors and ultimately, with views out of the Jesuit College’s windows, between the exhibition spaces and the beautiful setting of Kutná Hora’s architecture and nature outside.